You can write the chess moves and describe the play by using algebraic chess notation . The files are named a through h from the left of the player who play with white pieces. The ranks are numbered from 1 to 8 from the side of the player with whites.

The coordinate of each square is written by using its file letter and its rank number such as a1 , a2, b1 ,e4 etc. ( see the diagram ). When you move your piece , you write also a letter which symbolize that piece except the pawn . This letter may be different for the different languages in different countries. For example in English : K king , Q queen , R rook , B bishop , N knight. but in french : R le roi , D la dame , T la tour , F le fou , C le cavalier.. See a list of the chess pieces in different languages.

When you capture a piece you place a ( x ) symbol. Bxa4 means that the bishop captured the piece which is on the square a4. 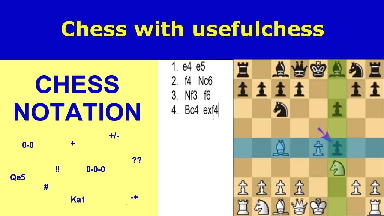 Watch the Chess notation video on our Youtube channel